A newly-written book needs time to sit before it gets published. The author needs time away from it, too, before he can re-enter it as a reader and editor.

The book I finished writing a couple of months ago, book 15 in the INSIGHTS series, and I needed these things respectively, and so I took a break from the keyboard, and read some of the nine other titles lined up in the sequence. 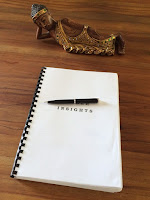 There were the four books written between SEXIER INSIGHTS (book 10, which came out in November 2014) and the just-finished one, all of which made possible successors.

Then there were earlier books, like the one straight after TRUER (book 4), or the one three after that, which, I realised on revisiting it, is very strong. But then, so are all of them in their way and their place.

So which one would come out next, making a suitable symbol for the anniversary of my setting out twenty years ago and coining the phrase ‘being yourself for a living’?

For a while I had wanted it to be the one before the latest, written in 2015, because of the title, but I was also still partial to sharing the one immediately before that, also written in 2015, as it travels through India and climaxes in Thailand.


I looked at the whole series in a way I had not done before, by re-reading more than half the unpublished titles, and now having fifteen in total (including the five already in print). I began to suspect strongly, though, that the latest one would come out next. Still, I suspended judgement. Then I revisited it with perspective and I knew for sure. It’s the one.

I’m a couple of edits and a cover design away from announcing the title, but I can say that it is a fitting one for the occasion, and the book is brimming with where things are at.

Posted by Robin Wheeler at 21:59 No comments: