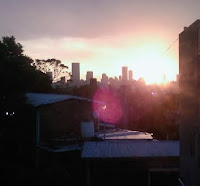 My aunt is dying. We are all dying but she is in the frail care section of a hospital just over the hill from where she grew up in the nineteen forties and fifties.

As I looked out of the window of her little ward, I saw a storm over the suburbs in the valley below. Inside the room, my aunt’s energy, her whole life as she lived it, was in the air.

Her choices, still being made, were in her circumstance. The taste of them lingers with me as I write.

I went to be with her as she approaches death. I thought, hoped, that there might be some connection.

My ears pricked up. I looked her in the eye. Hers were clear and light blue. Was she taking the opportunity to speak things through, to open up, to connect as she goes to die? “Why are you scared?” I asked.

“I need the nurses to change my clothes and I’m going to get into big trouble,” she said. “Everything in here is computerised.”

She was not there. She was mad. She was not talking about being scared of death. We couldn’t get onto the level.

She was still obsessed with trivialities. Her feelings were still projected onto trivialities. Death, even, is not going to change her. Death will come when she is not looking. She will not be there when it happens.

Is she really scared of dying, yet unaware that she is dying, and so scared of just anything, something made up, like the rest of us? Or can she look at life straight on?

Can we turn in to the truth?
Posted by Robin Wheeler at 12:09