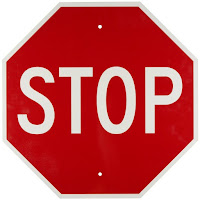 A few years ago I was stopped by a traffic officer for yielding at a stop sign in a business area of my hometown. He told me that he was going to give me a fine for the offense and, of course, I took offense, which kicked me into retaliatory action. While he prepared his form, I prepared my impromptu presentation.

With his belly in my face, I started slowly. “Can I ask you question while you write that?” I asked.
"OK,” he replied coolly, expecting the reaction he gets from everyone.
“What percentage of people do you think do what I did and slow down at that stop sign without coming to a complete stop?”
He didn’t answer.
“Really,” I continued. “Is it five percent, ten percent, fifty percent or ninety percent?”
After a moment he said, “Ninety percent.”

“That’s interesting,” I reflected calmly. “So almost everyone does the same, which means that the stop sign should not be there. People are voting with their behaviour with the vast majority making themselves clear. And you, who works for the people, choose to give me a fine.”
“It’s the law,” he retorted.

“That’s interesting too,” I continued. “That’s the same law that twenty years ago didn’t recognise you as worthy of the vote.” That got to him. “The law changes, you know,” I asserted, “and it is seldom wise or fair or in service of people.”
He kept writing.

At that point someone walked across the road in front of us and I picked up on that too. “That guy over there,” I said, “isn’t he jaywalking?”
“Yes,” replied the cop.
“So why don’t you give him a fine too?” I asked.
“I am busy with you,” he said.
“So you are exercising your discretion,” I told him.
“Yes,” he confirmed.

“Well, I exercised my discretion when I paused at the stop sign,” I said. “I slowed down, assessed the situation, saw that it was safe to go, and didn’t put anyone at risk. What makes your discretion better than mine?”
He didn’t have an answer to that.
“Are you older than me or more educated?” I went on. “Why is your decision placed above mine?”
At this point he could contain himself no longer. “You should speak to my partner,” he said. “He thinks like you.”

He shouted out across the road to his colleague, who approached and joined the conversation. I greeted him in my friendly and intense way and ran through some of the points I’d already covered, and he laughed.
“You’re right,” he said.
“I know that I am,” I smiled.

“Do you think that giving me that fine is going to change my behaviour?” I asked. “I am going to keep driving using my best intelligence and you have made no attempt to advise me on any better way of doing things, which should be the real point here, not so?”
They looked at me in disbelief.

“You’re just meeting daily income targets with those fines, not serving the community or improving the situation on the roads. Doesn’t it say on the side of your car, ‘Protect and Serve’?”
“Yes, we are given targets every morning before we leave the station,” the second cop said.
“There you go,” I nodded.

“One more thing,” I went on, “and I’m asking this man-to-man, as human beings, not to your uniform but to you as a person. Did you wear your safety belt when you drove here earlier?” Without waiting for an answer I said, “Because if not, that makes you a hypocrite. It should say on the side of the car, then, ‘Warning: Armed Hypocrite’, so that the community knows what we are dealing with.”
They were dumbstruck.

Driving my point home, I said, “So when you go to sleep tonight, just ask yourself if you are being true to yourself in what you do for a living. You may just be betraying your soul every day on this job.”

The second cop was laughing loudly at this point, loving every word of my argument, while the first just looked on.
"I’ll tell you something,” the first one said. “I’ve had pregnant women in tears begging me to let them off and I have still given them the fine, but you, you are a dangerous man.”
"That’s right,” I confirmed with a big smile. “Keep what I’ve said in mind,” I suggested, “because at some point you will be forced to be true to yourself in life.”

Stating my speaking fee, I added, “When you are ready I can come and do a talk to your department about how to live and work in a more sincere and intelligent way.”

“We have to go now,” the second one said as a vehicle drove up with two more colleagues in it.
“Let me give you each of one of these,” I finished, handing them each a copy of my book INSIGHTS and placing a business card in the chapter called ‘Questions for the Cops’. “This is a gift for you. You are welcome to stay in touch once you have read it. I have given away many over the years but never heard from anyone again, not once.”

“Thank you,” they said as they jumped into the vehicle, did a U-Turn through the intersection and sped off without wearing safety belts.

Fine-free, I continued on my way.

Posted by Robin Wheeler at 12:47 No comments: