There’s a dairy farm in Irene fifty kilometres from my house. It’s a popular weekend getaway where families can have breakfast or lunch while the kids play on the old tractors or watch the cows getting milked.

I go there now and then to get out of my usual environment and to introduce friends to the village where my paternal grandparents built a house in the early 1950s and lived until the late 1980s. Irene is where my father grew up, and where I have been going my whole life.

It's between the cities of Johannesburg and Pretoria, a piece of the country in the middle of the metropolis. Developments are encroaching from all sides but the essence remains, and it seems to be safe for the near future at least. I may move there one day, as the old house is still in the family. So I visit the area with all of that in the air. 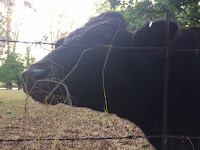 I was looking this morning at some of the photos I took on my last trip of the cows and calves in the shelters and roaming the fields on the farm, reflecting that their position there is as strange as it is beautiful and vital.

They have no control over it, though. They are entirely at the mercy of humanity. They are slaves and captives in a pretty prison. They cannot wander outside of the boundary fences or even the managed routines of the farm. They are alive but they cannot preserve their lives or do anything with them.

All they can do is find joy in the moment in acceptance of their lot. If someone wanted to convert them to beef, they would thus be converted. They are there, but under the power and in the hands of others.

Those others are not seen. They own the property and the industry but they run it from behind the scenes. Patrons enjoy the facility and pay for its presence, supporting the ownership but never encountering it directly.

This is the way with all of us in the world.

Someone behind the curtain owns everything. We just work here, or visit there, and pay either way. We are just like those cows. We are farmed, too, with our consent, albeit tacit. We are around because it suits someone's pocket, and we have agreed to their terms. 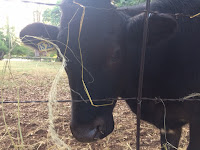 We think we have lovely surroundings, and we do, insofar as they feed us enough to make us profitable. We pretend to be happy and to make the most of it.

But look into our eyes through the barbed-wire fence.