2016 marks twenty years since I set out on my own and coined the phrase 'being yourself for a living' as a description of my experience and, while I was at it, a vision for humanity.


As part of this twentieth anniversary, I will be releasing a new INSIGHTS book, the sixth in the series, the title of which is still to be announced. This is owing to anticipation-inducing tactics, but also to me still deciding which book it will be. 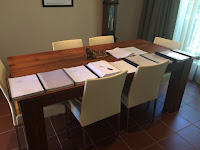 There are five titles out so far, and ten more written, from which I am working to choose the next sequel. There is the one I recently finished writing, and the one immediately before that, produced in the second half of 2015. Both have an immediacy to them, and both have names that fit with the occasion and the significance of the anniversary.

Then there are others earlier in the series that have been waiting years to be put out into the world. They will all be released in due course, and I have been reading through them, looking at the whole body of work in a way I had not done until now.

Each book has a theme, its own shape, and a place in the growing picture. It's fascinating and fulfilling to see them slotting together. Which one will be released in 2016?

The answer is coming.